Brits believe Dominic Cummings should step down from the government

The recent headlines around political advisor Dominic Cummings trips from London to Durham, on two separate occasions during the lockdown period, have sparked a lot of debate across the UK.

Appearing to flout the rules of social distancing, Cummings has come under intense scrutiny from MPs, journalists, and the public.

We wanted to know what you thought of the news, and whether you think Cummings should retain his position as Chief Advisor to Prime Minister Boris Johnson. 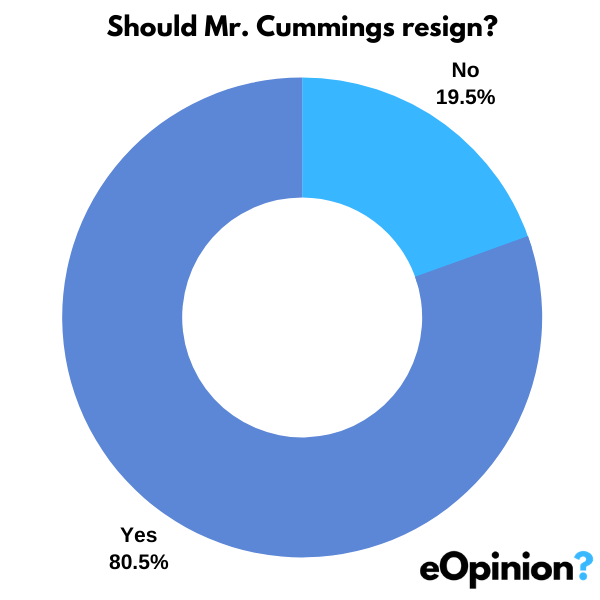 When the news broke that Cummings had broken the imposed social distancing rules during lockdown, many in the UK were not very happy to say the least.

As headlines continued, MPs across the House of Parliament have called for Cummings to step down from his senior position within 10 Downing Street. Overwhelmingly, over 80% of Brits agree and believe he should resign from his position following his rule breaking behaviour.

Dylan Lobo (Twitter) said:
“The breathtaking arrogance of Cummings and his Tory lackeys has made this country an extremely dangerous place in the middle of a pandemic. He needs to go urgently if the government is to restore a modicum of credibility. To put it bluntly – this is a matter of life and death. The longer Cummings hangs around, the more lives could be lost. Look in the mirror, find your inner human and do the decent thing.”

Liz said:
“I think he should be sacked rather than resign. The reality is people in public office need to maintain standards at least equal to, if not higher, than the rest of the population.”

However, not everyone believes Cumming’s mistakes should mean he loses his job.

One anonymous quote we had from the eOpinion community said this:
“He should be fined, but not affect his job, same as an ‘ordinary’ person”

Jeggie said:
“Both of my neighbours have broken isolation rules, as have some of my family members and others I know. To crucify Cummings on the Say-so of the Guardian and Daily Mirror is purely political point-scoring.” 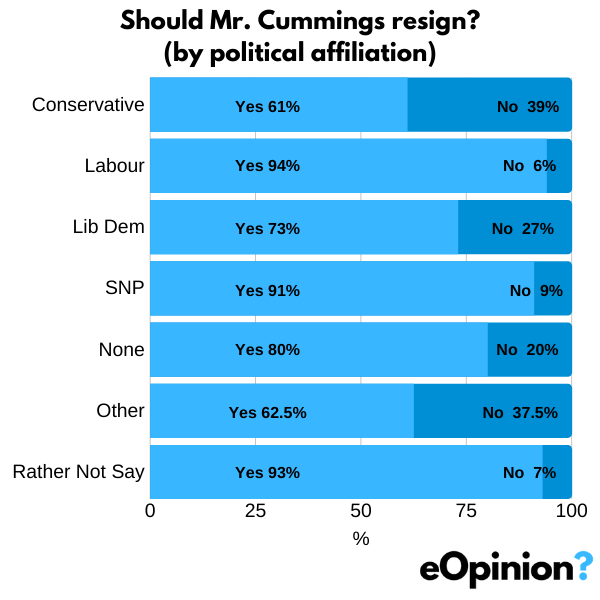 Over 60% of Conservatives think Dominic Cummings should step down

Conservative leader Boris Johnson has so far backed Cummings, and even asked for us to “move on” from the story in the daily press briefings, yet not all Tory supporters echo his loyalty. Over 60% of those we asked who support the Conservatives, do believe that Cummings should be stepping down from his position.

Mike said:
“Did the right thing as a parent but the wrong one as a government advisor.”

Jim said:
“How can the public be expected to follow lock-down rules if people like this don’t?”

Yet as the debate over Cummings continues through the week, there have been comments that he’s being harassed by the media over his mistakes – which might account for the 40% of Conservatives in our respondents who think he shouldn’t have to resign.

Amanda said:
“The press are bullying him”

Mark said:
“The guy has made a mistake, if he had not been involved in Brexit would there be all this fuss?”

As the lockdown guidelines remain, the incidents of rule breaking by Cummings has caused frustration.

Whilst relaxed measures might be coming into place, for many that have followed rules over the past nine weeks it can seem frustrating that they too can’t visit loved ones. With the threat of fines in place for those of us that do break the guidelines, it’s clear that many Brits feel Cummings should lose his position for his Durham trips.

The survey was conducted on eOpinion.org with 3005 people on 26th May 2020 and is nationally representative.