Is money driving the decision?

After a long break from our day to day life, Premier League football makes a return this week and we wanted to get some insight from the UK public on how they felt about it.

It’s fair to say that there were some pretty mixed feelings on the topic and the beautiful game has in general been pretty missed, but the subject of money in the game cropped up again and again. We also saw a lot of eOpinions around the fact there wasn’t a consistent resolution to leagues across the footballing spectrum which many deemed very unfair.

Dave Wilkinson had this to say:

“I follow a Non-league team first and foremost. And a L1 team from a distance.
Our seasons are over. My non league team had a shot at the FA Vase. The money would have ensured the survival of the club for years. No guarantees of that but all stops pulled out to make sure the premiership finishes. It’s sickening.

Football used to be about the fans. Playing games in empty stadia is about money.

Cancel all football or play all matches at all levels.” 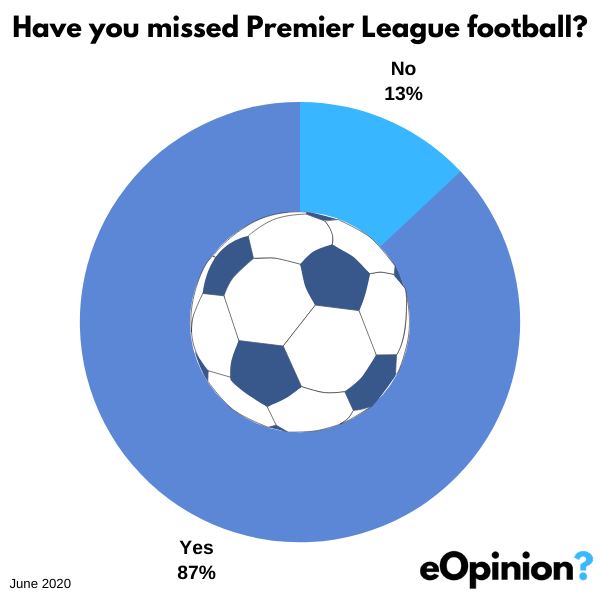 It’ll probably come as no surprise that a huge percentage of the British public have missed football during the Covid crisis, what may be more surprising is that of the 13% who told us they didn’t miss it, we saw repeated comments about how this break has really changed how they view football and how they think they’ll engage with it in the future.

John from London said: Initially I missed it a huge amount, used to really look forward to going to the game at the weekend but as the weeks have gone on I have started to miss it less and less. So much so that I’m probably not going to renew my season ticket next year which the wife is happy about!

Eleanor J from Birmingham told us: This cold turkey has really broken my addiction to watching football, not sure I’ll go back to watching it like I did before. 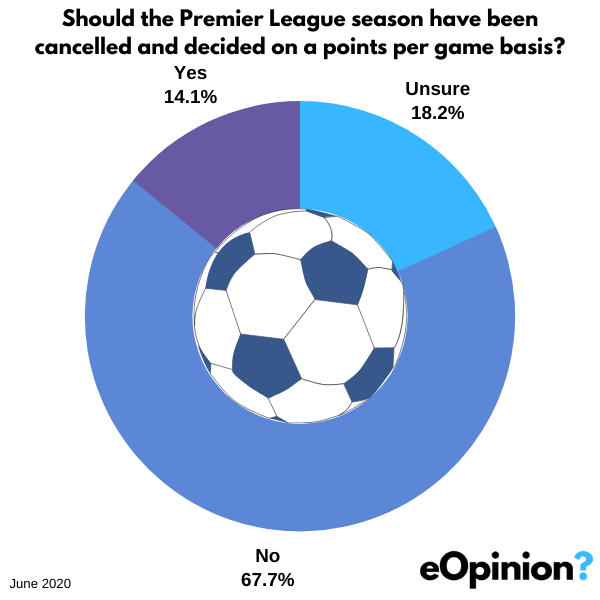 This question drove the most of comments in this Speedy Poll. With just under 68% saying it shouldn’t have been cancelled, the remaining 32% were by far the most vocal with many claiming that economics were the driving force in ensuring the season was finished.

A selection of the comments outlining this economic theory:

Demian Petch: The season should not of been continued. It was a decision made on money not safety & it’s clear from the infection rate going up it is unsafe.
I’m sure there’s a mathmationtion that could combine points per game, mid season form & second half season form up or down turn in form. The award the places as found.

Owen: I think the league, all leagues should had been axed. Health over capital, fans think this is good, the government apparently think it will boost mood. Premier League and FA aren’t bothered who wins, draws or loses. All they are on about is capital, they don’t care about fans… Just money, money, money.

Ben: Money talks. The sensible decision, from both a health perspective and it terms of causing as little disruption to future seasons as possible, would have been to null and void the league

Watford Bear: Not happy that, as a season ticket holder (Watford), I need to subscribe to BT, Sky and Amazon in order to watch my team”s remaining 9 PL games. 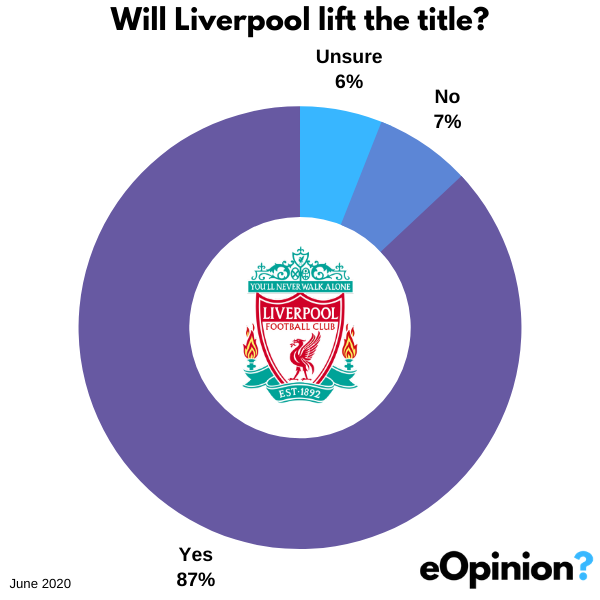 When we first looked at the results of this question we were a little surprised that the % of people who thought Liverpool would win the league was not higher but a little bit of digging showed us that of those who said no 98% were either Manchester United or Everton fans. 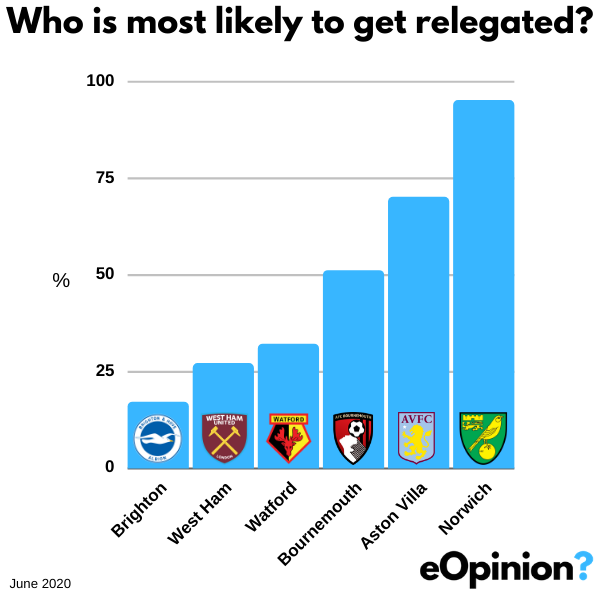 If the predictions of the British public are accurate, Norwich City have a lot to worry about. Currently sitting bottom of the league they were the number one pick of our audience to be relegated with 95% stating they would be in the Championship next season.

Whilst we are sure that football will be a welcome distraction for most, a semi move back to normality and something that most are looking forward to this week, many of our our Speedy Poll participants pulled no punches questioning the motives behind the decision.

Is money the driver? Will it be the same behind closed doors? Will fans get to go to a stadium before the end of this season? Only time will tell but whatever way you look at it, it’s definitely going to add some new topics to the everyday conversations going on.

If you are wise and have something to say or an insightful eOpinion to give, drop your email in the sign up box below and we shall send you our latest Speedy Polls.

Sign up now to join the eOpinion community and start sharing your thoughts.

The survey was conducted on eOpinion.org with 4,717 people on 11th – 14th June 2020 and is nationally representative.