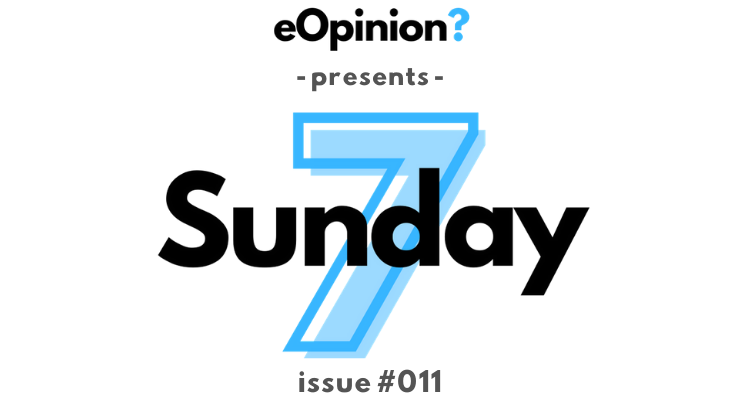 Welcome to issue #11 of the eOpinion Sunday 7!

As always, firstly some housekeeping – here is Friday’s Daily eOpinion if you didn’t get round to it.

If you have been forwarded the Sunday 7 by email or seen it on social media somewhere, there’s a sign-up form at the end so you can receive it directly next time. I don’t want you to worry unnecessarily about missing it in the future! 😀

Here is our round-up from this week, enjoy!

The first story this week is probably not surprising but worth noting anyway.

Alcohol misuse charity Drinkaware has recently found that those going through job loss are drinking more than they did pre-pandemic.

The research highlights that 49% of those made redundant or in process of being made redundant are drinking more than they did in March last year. It’s a 38% increase!

There are lots of other increases too, read more on the subject here if interested.

With the sun finally out and restrictions permitting, I imagine there will have been many a BBQ lit this weekend.

In line with launching their new BBQ range, Aldi have researched the biggest BBQ related fails in the UK.

Nearly half of us serve burnt food, a quarter of us can’t even light out BBQ and one in ten don’t clean the grill.

If someone you know lives in Portsmouth and invites you round for a burger or two, it might be worth giving it a miss. There’s a 40% chance you’ll get undercooked food.

Without doubt, the single most talked about aspect of football this season, something that impacts all football fans irrespective of allegiance, is VAR.

With that strange and lengthy pause now commonplace before being able to cheer a goal, it’s hardly surprising that research from the FSA, shows 95% of fans think VAR makes watching a game less enjoyable.

For more insight including the fact, only 26% of fans support the use of VAR, have a look at this article.

4. Humans, not the only ones susceptible to a little weight gain! 🐶

While lockdown has had a weight impact on many humans it appears the nation’s dogs are suffering as well.

Research by Pumpkin Pet Insurance shows that 36% of dogs put on weight in the last year.

With 45% of owners admitting to giving their dogs extra treats, it’s probably not too surprising.

Weirdly, 56% of pet owners said their dogs gained weight when they did.

More details can be found here.

I’m often a little cynical when I see surveys around vegans vs. meat eating but this one caught my eye. I shall share the headline and the source and you can decide your view on it yourself.

Happiness tracking tool, trackinghappiness.com found that if you are vegan as opposed to a meat eater, you are 7% likely to be happier.

Only 14% of our meat-eaters reported a negative bias towards vegans. Non-vegans aren’t nearly as opposed to veganism as the stereotypes suggest.

Full article and methodology can be found here.

6. Do dinosaurs still walk among us? 🦕

I’m cramming two dinosaur reports into this one.

First, a survey by Boat Rocker Studios as part of International Dinosaur Day.

10% think dinosaurs still exist in some remote corner of the world.

One in six adults believe dinosaurs only lived in Africa, Mexico and North America.

25% think dinosaurs walked the earth at the same time as prehistoric humans – despite there being around 65 million years between them. (I may sound clever but I didn’t know the gap, it was in the article)

Another 10% think dinosaurs shared the roaming plains with modern elephants, which is closer – although still 10 million years more recent than dinos.

Secondly, a survey by Twycross Zoo shows kids know a lot more about dinosaurs than other animals.

Despite being extinct millions of years, 92% of children can identify a T-Rex. 🦖

More stats can be found here.

7. Something a little different. 🦟

This week, I’m highlighting something I saw while researching the Sunday 7.

Bug charity Buglife is asking motorists to help them out by monitoring their number plates on journeys to see how many bugs they have splatted.

It’s pretty simple, you just use an app to photograph before and after shots.

You can find out more details here and see if it is something you’d be interested in doing to help them out.