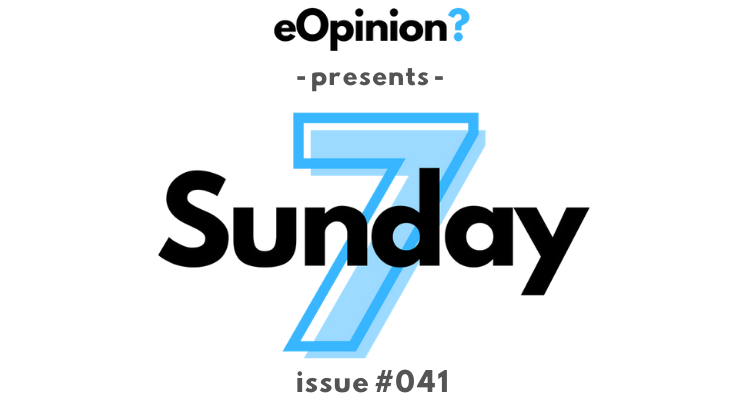 Welcome to issue #41 of the eOpinion Sunday 7.

New research by residential property services provider FirstPort has found more Brits would rather live near the North East institution that is Greggsthan having an upmarket supermarket like Waitrose or Morrisons on their doorstep.

Perhaps surprisingly, the importance of proximity to a good school scored the same as Greggs, showing the nation’s love for sausage rolls and steak bakes.

Schools were also below newsagents and pubs for location importance, glad that my priorities align with the rest of the UK’s.

Find out more about the UK’s location priorities.

A new study conducted by the greetings card website thortful.com, has revealed the kinkiest hotspots in the UK.

According to the research, Cornwall was revealed as the kinkiest area in the country, with Wiltshire and Durham following closely behind.

However, Leeds was found to be the most romantic.

Only two of the cities in the top 10 were based in the North of England, showing that southerners are maybe freakier under the sheets.

You can see the full list of Kinkiest towns here

Researchers at Cardiff University have found that women find men more attractive when they have their faces covered by a mask.

Apparently, the blue medical masks in particular really boost the attractiveness of those wearing them.

The reasons ranged from associating masks with health care professionals, hiding undesirable features, and drawing attention to the eyes.

So Boris’ new mask update may break the illusion of the fitty’s you’ve seen around.

4. Brits can hold a grudge

The typical UK adult is currently harbouring six grudges, according to a recent Trustpilot poll.

The survey found that over two-thirds (69%) have a lingering gripe of some sort – including not getting a job, being dumped, and bad customer service experiences.

On average, the longest they’ve ever held a grudge for is eight years – but some have maintained one for 20 years or more.

However a fifth admitted their mental health has suffered due to ongoing feuds and the poll found that one-third of people regret holding grudges.

Might have to rethink a few of my own grudges.

5. Geography is not our strong point.

A THIRD of Britons cannot point to Germany on a map, a poll from The Knowledge Academy found.

Almost two-thirds (62 per cent) could not find Japan while 73 per cent drew a blank with Ukraine, Europe’s largest country.

Australia outfoxed 45 per cent of those asked and even holiday favourite Spain was a mystery location for one in four.

Scores were very low for Indonesia and Vietnam, best brush up on our globe knowledge guys!

Independent booksellers have reported healthy Christmas trading this year, with almost 60% of participants in *The Bookseller*’s survey saying trade was “very good” compared to the previous year.

Some retailers were up by as much as 50%, attributed to being able to sell in-person this year and not being reliant on online sales.

Good to see that paperback is making a comeback.

According to a survey commissioned by mental health charity Mind, more than a third of people (37 per cent) in Sheffield said that exercise provided the opportunity to have conversations about mental health once or on multiple occasions.

Three in five people (60 per cent) also said that exercise makes them feel comfortable enough to have conversations or open up about their mental health.

So to sum up exercise is pretty much beneficial for both your physical and mental health as well as being able to open up to others about it… (puts on trainers).