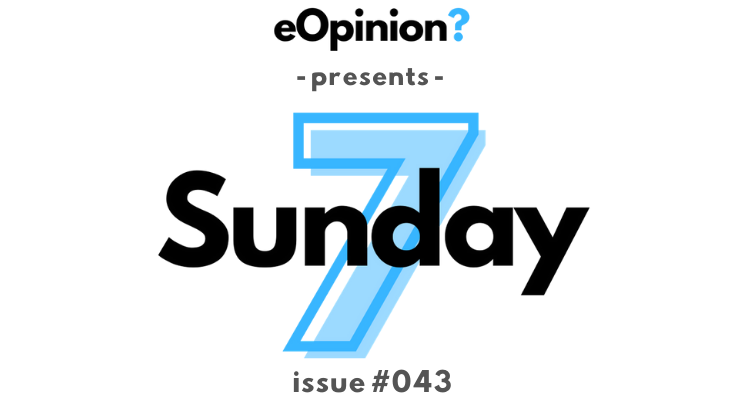 Happy Sunday eOpinion tribe, hope you are making the most of this weekend.

Welcome to issue #43 of the eOpinion Sunday 7.

1. Which animals do you back yourself to win a fight against?

Forty five per cent of people in the Midlands think they could win in a fight against a goose without weaponry, but, only 18% believe they have a chance against an eagle.

The respondents of the YouGov survey reported on whether they would back themselves against a range of animals.

Men tended to be more confident in their hypothetical wins than women.

But Ellesse Janda, a geosciences PhD candidate weighs in how some respondents may be a little delusional about their fighting skills.

See what animals people would take on here

All the swear words in the English language have now been ranked and categorised in order of their offensiveness by the British broadcasting regulator, Ofcom.

The words range from ‘cow’ in the mild section to ‘motherf***er’ in the strongest section.

All of the words have been placed into 4 groups; mild, medium, strong and strongest.

Have to say I was surprised by how some were ranked, would be a few changes it was down to me.

A Viser survey of UK employees, all of whom had been job hunting in the last 18 months, found that 76 per cent had ghosted a current or prospective employer – meaning they stopped all communication without any warning or explanation.

More than two-thirds (68%) reported that they were concerned about the impact that ghosting could have on their career.

4. Women will choose a pet over a partner.

A Valentine’s Day survey conducted by pet store Jollyes, has revealed that women are more likely to ditch their partner than their pet.

I technically can’t really weigh in on this one, being partnerless, but I would NEVER ditch my dogs.

Britons masturbated more often during the country’s first Covid lockdown reveals research from academics at the universities of Bournemouth and Roehampton.

Researchers said people were most likely to attribute the increases to boredom and more free time.

However, despite strong predictions, there was no ‘baby boom’ 9 months after the pandemic first started, seems as though the pandemic was more of a solo sexual experience for most.

Ryanair and British Airways have been named the worst short-haul airlines in an annual survey by Which?, with one passenger describing Ryanair as “proud of being difficult”.

Ryanair scored just 47 per cent in the refund satisfaction category, with one in five customers telling Which? it took more than a month to get a refund for a cancelled flight (I remember this exact experience in 2020 very well).

So if you’re looking for a good flying experience Which?’s survey recommends Jet2.

A survey by Cardiff University and Natural Resources Wales (NRW) across Wales found fewer signs of the mammal on nearly all waterways.

The number of otters had only recently been increasing, after they were wiped out in the 1950s and 60s.

The results are being described as a “wake-up call” about the state of UK rivers and the pollution. Researchers will now look at otter numbers in England.

In short, we need to keep our rivers clean to save the otters!