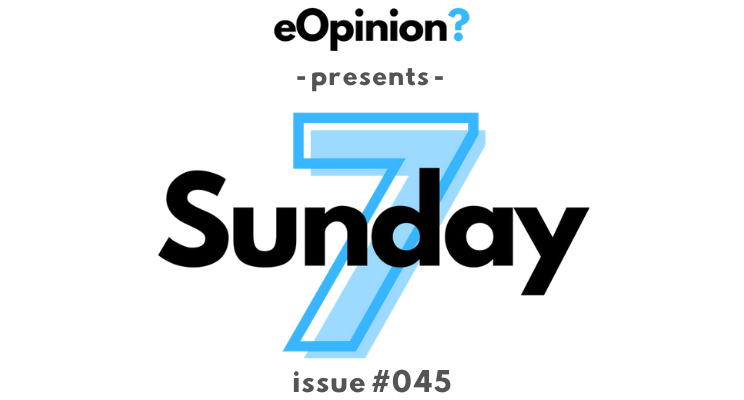 Welcome to issue #45 of the eOpinion Sunday 7.

A new poll from Gala Bingo has revealed the 15 much-missed programmes that viewers would like to see make a return to TV screens.

Gavin and Stacey is the noughties TV show that Brits are most desperate to have back, followed by The Bill and Life on Mars, according to research.

A much as I love a 00’s series, sometimes things are best left as they are!

Find out the top 15 here

Vegans are far more interested in open relationships than meat-eaters, according to a new survey.

Jo Hemmings, a behavioural psychologist, argues ‘Vegan’s are more likely to consider relationships that are also different from the ‘norm’… who knew?

The perfect romantic partner is open-minded, funny and triple-jabbed, a new survey from Talk Talk has revealed.

Sustainability, vaccination status, and even ‘normal looking eyebrows’ came out as important themes for a prospective romantic partner in the modern world.

Kindness was the number one sign you’ve got a keeper, with over half of the vote.

The research also showed how many of us expect proposals on Valentine’s and the percentage who would break up with their other half if they didn’t receive a Valentine’s present.

A survey by the international players’ union Fifpro has found that 75% of players in the men’s game want the tournament to continue on a four-year cycle.

Despite strong opinions from politicians, sponsors and governing bodies the vast majority of players say they are happy with the current 4 year scheduling of the world cup.

In total, 81% of players rank either their domestic league, or the World Cup as their favourite competition.

6. Not that fussed about Oz.

With Australia about to open to British visitors, a new poll puts the country at the foot of the short-term wish list for UK travellers.

In a survey released to the Sydney Morning Herald and the Melbourne Age, Australia was placed last – behind Europe, North America, Asia, Africa and South America.

When asked about reluctance to travel to Australia, 63 per cent said it was too expensive.

Car finance company, Zuto, compiled research to find out what annoys drivers in the UK the most, before looking at the cities where people experience road rage the most.

Bristolians are most likely to be annoyed by “late/no indicators”, while 57 per cent of people are frustrated by “cars getting too close behind” according to the data.

Potholes are another huge annoyance to British drivers and BMW drivers seem to be the biggest antagonists of the road.