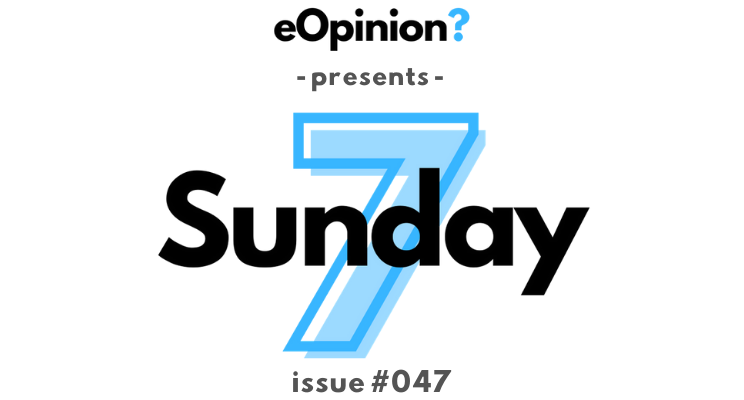 Happy Sunday eOpinion tribe, I hope that you are all looking after yourselves this weekend.

Welcome to issue #47 of the eOpinion Sunday 7.

The Irish accent has been crowned the flirtiest accent in the UK and Ireland according to a new survey commissioned by Betfair Casino.

Respondents were asked which accent leaves them feeling a little hot under the collar and Irish came out on top, taking 16% of the vote and beating the likes of Geordie (15%) and Essex (13%) accents which closely followed in second and third place respectively.

As an Essex girl, I am pleasantly surprised.

Read about the flirtiest and friendliest accents here.

For World Book Day, Camden Market commissioned a survey to discover the nation’s most loved children’s books of all time.

The Famous Five Series topped the poll, followed closely by The Lion, the Witch and the Wardrobe and Charlie and the Chocolate Factory.

The study found 52% adore these stories because they remind them of their own childhood, while one in four think they teach valuable lessons.

“Dawn dating”, which, as its name would suggest, refers to the act of going on a date in the morning.

Half of single people have been on a morning date, or would like to go on one a new survey shows.

According to dating app Badoo, which surveyed 1,000 of its users, 71 per cent of single people would be impressed if someone asked them to go on a date in the morning.

If anyone wants to take me on a dawn date let me know, I have an Essex accent and everything.

Six pairs of jeans will be disregarded on every shopping trip, shows a One Poll survey and nearly half say denim is the most difficult item to buy.

It’s little wonder that once found, a trusty pair are kept and reworn for six and a half years on average, despite many of us having wardrobes full of ill-fitting trousers.

In fact, the average woman owns up to three pairs of hardly-worn and badly-fitting jeans languishing at the bottom of a drawer, I’m glad I’m not the only one!

A recent YouGov survey has found that people think it would be better if people drank less alcohol but used more cannabis.

Alcohol use far outstrips cannabis use, with the difference getting greater as respondents get older.

However when asked ‘Would it be good or bad if the average person drank less alcohol but used more marijuana?’ 27% of respondents were in favour, 20% against and 38% of respondents stated that they felt it would be neither good nor bad.

Doncaster’s top ten male and female sex ‘tricks’ which make you a better a lover have been revealed in a new survey from IllicitEncounters.com.

Women from the town most want an unselfish lover who cares about their own pleasure more than his.

Second, on the female wish list is a partner who really gets to know her body and what turns her on and off.

For Doncaster men, the number one request was for women to initiate sex more often.

Not sure if these count as ‘tips’ or common sense but hey!

An overwhelming 95 per cent of people find reading older novels and plays such as Tolstoy’s War and Peace hard work, a poll has found.

Many said they bluff up their reading lists to impress others.

The poll by TV channel Dave and the University of St Andrews found that half of Britons pretend they have read classic novels to impress others.

Personally, I’d rather read an easy-going fiction than force myself through Tolstoy.