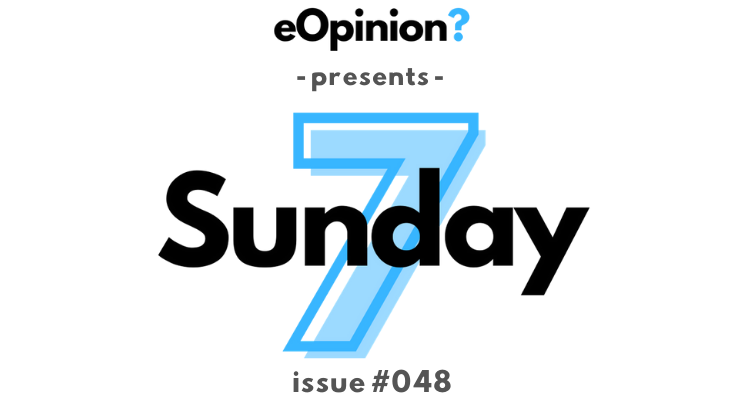 Happy Sunday eOpinion tribe, I hope that you are all looking after yourselves this weekend.

Welcome to issue #47 of the eOpinion Sunday 7.

More than 1 million girls who thought of themselves as sporty at primary school lose interest in physical activity as teenagers, according to estimates based on a new survey by Women in Sport.

The survey found that a fear of being judged and a lack of confidence were the main reasons cited for a waning interest in sport among teenage girls.

Hopefully going forward there will be more options for girls to continue their interest in sport throughout their teenage years and into adulthood.

2. Saddest Songs of All Time

The UK based site, StudyFinds.org along with OnePoll recently conducted a deep study about music.

They found that 36% of people opt for a sad song when they are feeling nostalgic, 24% play their favourite somber tunes after a break-up and about 48% admit a sad song can brighten their day.

BRB just going to add these tunes to my sad playlist.

Almost one third of people have experienced “the ick” when dating someone new or when in a relationship, according to new research.

A survey commissioned by feminine care brand WooWoo found that women were more than twice as likely (38%) to get “the ick” than men (15%).

“The ick”, is a specific turn off that quickly turns attraction towards a potential partner into a feeling of disgust.

The survey found that it is most common among 25-34-year-olds, which explains a lot of my dating history.

Women outshine men at DIY as poll reveals ladies are more likely to roll up sleeves and get stuck into home improvements reveals a Purplebricks survey.

More than one in three women (34 per cent) prefer to do the work themselves rather than hire in help, only 28 per cent of men feel the same.

Just 12 per cent of over-55s would call in a professional to make a home more ‘sellable’ compared to around one in four people in their 20s.

I’m someone who attempts to do DIY, quickly realises the difficulty of it and ends up asking someone else to complete the task, but bravo to the third of women who finish the challenge themselves.

The top cat names for male, female and breeds have been revealed.

Poppy came in top of the female list and Charlie for the boys.

The survey by CATS Protection also unveiled the most original names given by cat owners such as ‘Broccoli’ and ‘Couscous the puss puss’.

So if you are looking for inspiration or want to find out how original… or unoriginal your feline’s name is, give it a read.

The result of a poll by the charity Guide Dogs revealed that nearly three quarters of British dogs show signs of poor mental health.

Around 8.8 million dogs exhibit behaviour indicating anxiety or depression, which can be actions such as loss of appetite, destructiveness and low activity levels.

As many as 18 per cent of dogs can show such symptoms as often as weekly and a quarter of owners say they didn’t realise a dog could suffer poor mental health.

Environmental concerns are far from the minds of most clothes shoppers, a new survey commissioned by the aid agency Tearfund suggests.

The online survey conducted by Savanta ComRes was commissioned as part of a campaign for Tearfund to highlight the link between the fast-fashion industry and the climate crisis.

One quarter (23%) of respondents said that care for the environment — reducing their carbon footprint or not adding to landfill — was their main motivation for buying fewer clothes.

However, saving money and getting the most value out of existing clothes were the top two reasons that most shoppers chose to buy fewer new clothes (54% and 43%).