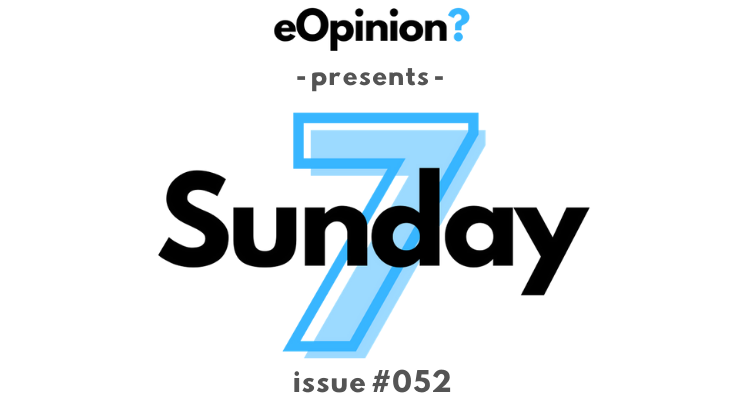 Happy Sunday eOpinion tribe, I hope you are having a wonderful Sunday!

Welcome to issue #52 of the eOpinion Sunday 7.

This week Elon Musk, who has a 9.2% stake in Twitter, polled his followers asking them if they would want to be given the option to edit tweets.

The feature has been one of the most requested changes to the social networking service for over a decade, and I for one vehemently agree!

“Edit has been the most requested Twitter feature for many years. People want to be able to fix (sometimes embarrassing) mistakes, typos and hot takes in the moment,” tweeted Jay Sullivan, Twitter’s vice president of consumer product.

After a few typos and faux pas experience myself, I really hope the testing for an edit button is successful.

A new poll by Sky Mobile has shown that spoken phone calls are becoming notably less popular for younger generations.

The survey comes ahead of the 49th anniversary (today) of the first public mobile phone call.

The poll unveiled that eight in ten now prefer texts, instant messaging or video calls and more than half of 18 to 34-year-olds will schedule phone calls unlike over 55s.

So don’t feel too bad if someone airs your call!

3. Most Shocking Moment in Oscars History

It’s a moment that has been watched and discussed to death but it has also now been crowned the most shocking moment in Oscars history since the award ceremony started in 1929!

The result was concluded from a recent OnePoll study, in which the top 10 most shocking moments of the Oscars were ranked.

Coming just behind the Smith Slap was the awkward Best Picture mistake from 2017 and Jennifer Lawrence tripping up the stairs (pretty tame compared if you ask me).

Find out what the top 10 were here

Quick warning ahead to those with good hygiene and sanitation, this may disgust you in numerous ways.

According to a recent study, more than 25% of Brits have NEVER washed their pillows and a handful of respondents admitted to leaving it four weeks or longer before changing or washing their towels.

The information comes from luxury online bedding brand Dusk who carried out a survey to explore the UK’s cleaning habits and discovered how often the nation washes common household items like bedding, towels, duvets and pillows.

A survey has revealed what makes up the perfect full English breakfast, surprisingly leaving out two classic ingredients!

The cooked breakfast came out as the nation’s favourite morning meal in the research carried out by Farmhouse Inns, with more than half of respondents naming it their number one.

With 54 per cent of the vote, a full breakfast wiped the floor with the competition, beating porridge (7%), cereal (7%) and pancakes (6%).

A male contraceptive pill is set to be trialled later this year, as a new survey reveals the percentage of UK men who might be inclined to take it.

There have already been a number of different types of the ‘male pill’ but none has proved as popular as the female equivalent.

LloydsPharmacy Online Doctor conducted a UK-based survey to find out if men were willing to use the new contraception.

Find out which way here

We may be given a chance to get the men to take a contraceptive pill instead of ourselves, but we are also much more unlikely to be successful when asking for a pay rise than our male counterparts.

A YouGov survey of more than 16,000 adults found that of the 40% of people who asked for a pay rise, just over a quarter succeeded.

But disparities are revealed when breaking down the data along gender lines.

Forty-three per cent of men asked for a pay rise, compared with a third (33%) of women, out of these requests, a third of men were successful, while (21%) of women received a salary increase in comparison.

The joys of being a woman ay?